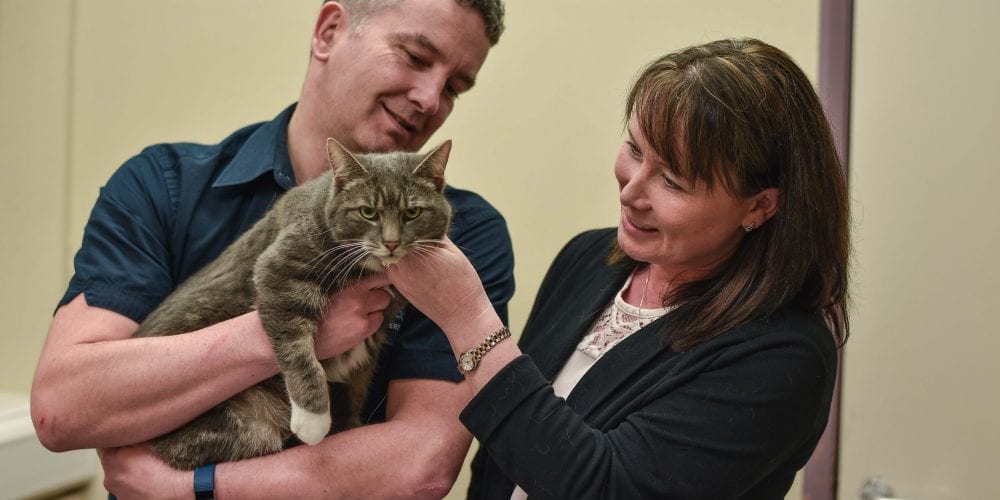 Dr Ian Hopkins, Principal Vet for the Willows Veterinary Group, which has its main animal hospital in Hartford, near Northwich, is looking for more moggies to join their local database of suitable cats to turn to when a vital blood transfusion is needed to save the life of a poorly puss.

Ian, who has two cats of his own called Tom and Jemima, said: “Transfusions can save an animal’s life but up to now we’ve tended to get blood only from staff members with cats and clients we know well. Now we want to spread the net further by having a register of local people we know we can turn to when the need arises.

“The sort of cats we’re looking for to be donors are those under eight years old which have a calm personality and are not too feisty.

“While ideally they should weigh at least 4kg we’re not looking for big bruisers because they’re more likely to fight and pick up diseases from other cats.

“All potential donors are fully screened for physical suitability and diseases.”

Ian is Head Vet at Holly House Veterinary Surgery in Mobberley Road, Knutsford. He works part of his week at Willows Veterinary Hospital in Hartford where there is a specialist referral service for more difficult cases where the need for blood transfusions frequently arises.

Both are part of Willows Veterinary Group which offers a wealth of knowledge and expertise through 25 small animal practices, a referral veterinary hospital, two equine centres and a seven-office farm practice which are located across Cheshire and into North Wales, the Wirral and Staffordshire. Willows is accredited by The Royal College of Veterinary Surgeons.

One of those backing Ian’s call is Zoe Storer from Byley near Middlewich, whose four-year-old cat Tilly has donated blood to help save the life of a fellow feline.

Zoe, an accountant, explained: “Tilly is one of my five pet cats and I’ve had her since adopting her from the RSPCA at nine weeks old. She has one of the calmer temperaments of the five.

“She had all the necessary health checks and became a donor for the first time last June.”

Zoe added: “I got a call from Willows Veterinary Hospital asking me to bring her in as soon as possible for a transfusion to help a cat which needed an operation within a couple of hours.

“I took her in about 1pm and after a test to check she was compatible with the sick cat, Tilly gave the donation and was able to leave the surgery about an hour later.

“I understand the cat which received the transfusion was very poorly but did survive, so Tilly’s donation saved its life.”

She added: “Just like humans, cats are often in the situation where their lives depend on an emergency donation and I have been very happy to help.”

Ian, who holds a Royal College of Veterinary Surgeons (RCVS) certificate in Small Animal Medicine which qualifies him as an Advanced Practitioner in his field, explained the blood donor process.

He said: “We give them a small amount of sedative before taking the blood after shaving away a small area of fur on the neck.

“The usual amount of blood taken is about 50 mls and we leave three months between donations. Providing the owner agrees, a fit and healthy cat can go donating for quite a few years but we don’t take blood from older cats.

“It’s important to say that we don’t store blood so we only ask for donations to be made as and when they are needed.

“Blood donations are vitally important and can be real lifesavers. The cat helped by Tilly was very sick and would not have survived without the blood she gave.” 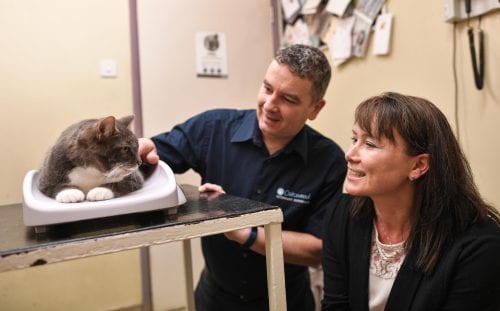 Zoe added: “They are given a sedative before making the donation and when they come round afterwards they are a bit drowsy but apart from that they’re absolutely fine.

“I certainly wouldn’t let Tilly do it if she was being put through anything unpleasant or stressful.

“I’m a massive animal fan and it’s wonderful to know that what my cats are doing is helping other animals at a time when they need it most.

“I think it would be horrible to be in a situation where any of my cats needed a transfusion and there was no blood available for them.

“It’s a really good idea for the vets to have started the donor database. I’d recommend registering to any cat owners because I think it’s a fantastic thing to do.”

To register for the blood donor database, contact Willows Veterinary Hospital on 01606 723202.