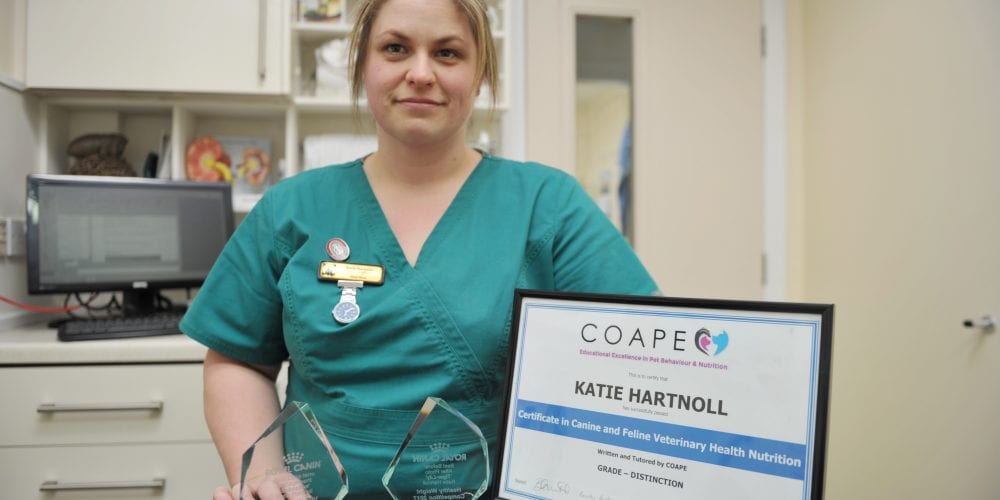 A VETERINARY nurse from Middlewich has scooped a double award for helping obese pets fight the flab.

Katie Hartnoll, Head Veterinary Nurse at Abbeycroft Veterinary Centre in Northwich, which is part of the independently-owned Willows Veterinary Group, will head to a glittering awards ceremony in Kidderminster later this month to receive her trophies.

The overall winner will also be revealed at the special event on March 15, being held at Hogarths Stone Manor, which will bag the winning veterinary nurse and the pet owner £1,000 worth of holiday vouchers.

The annual Healthy Weight Competition, run by Royal Canin pet food manufacturers, was set up to reward veterinary staff and pet owners for the journey they take together to overcome their beloved pet’s battle with the bulge.

Just like humans, obesity in animals is linked to a shorter lifespan and a variety of health problems including diabetes, arthritis, heart and respiratory diseases.

Katie, a mum-of-two from Middlewich who has heard of owners feeding Chinese takeaway, breakfast bowls of milk and even cream cakes to their much-adored pets, claimed victory in two of the six categories with two of her most successful cases to date.

The 32-year-old, who has a Staffordshire Bull Terrier called Rhia, led the team to set up Cheshire’s first weight management centre for pets at Abbeycroft in Station Road and has since helped 77 dogs and 26 cats embark on their fat fighting challenge.

The scheme is sponsored by Royal Canin and staff underwent an intensive three months of advanced training and assessment in pet body condition scoring and nutrition to gain approval for the centre.

Katie, who holds a certificate in Canine and Feline Veterinary Health Nutrition, said: “I was really happy when they rang to say I had won two awards and I wasn’t just happy for myself, but for the animals and owners who have won too.

“We have been on this journey together and gone through the ups and down of it all with one another. I could not even have thought of entering these awards if it wasn’t for the commitment and hard work of the owners and it is a fantastic ‘well done’ for all of us.

“What these owners do for their pets by helping them slim down is life changing. It’s wonderful to see the change in their pets as the weight starts to come off. Not only are they fitter and healthier in themselves but they are often visibly happier in their character too.”

In the Best Before and After Photos category, Katie won with 11-year-old Jack Russell Tiger-Lily who shed an astonishing 3.8 kg in weight, almost 40 per cent of her body weight, over a seven month period after she was clinically diagnosed as obese. 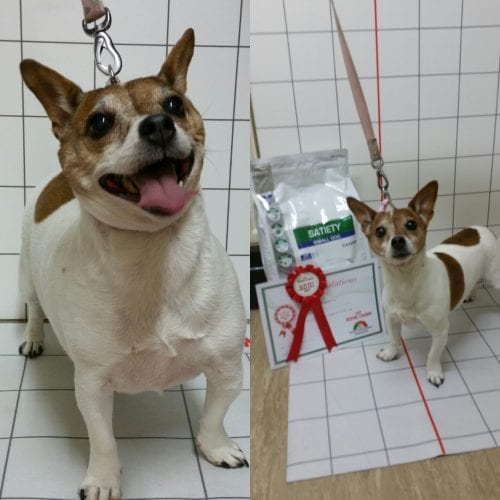 The little dog was being treated for a limp which had been noticed by owner Jenny Clarkson of Northwich and turned out to be arthritis in her hip. A fellow Willows veterinary practice referred her to Katie at the Abbeycroft clinic and their journey to lose her weight began.

The retired grandmother-of-two said: “Katie is a lovely person and very encouraging and I think we all feel like we have done a really good job together.

“It’s terrific because I haven’t seen Tiger limping at all since she got the weight off and she can jump up on my leather suite now, which I am not sure is a good thing, but it nice to see.

“I have three steps leading down into my garden and I used to have to carry her up the top two because she was too tubby to make it but she has no problem now.”

Katie had to work hard to gain Tiger-Lily’s trust. She said: “In the first appointment, I couldn’t even get close enough to her to take measurements. She was very nervous and would shy away from touch and bark if approached.

“Four months into the programme and we had a breakthrough! Tiger Lily allowed me to stroke her and by the end of the programme she was so much better in her demeanour and temperament and allowed me to be completely hands on when assessing her. She would even come to me for a stroke!”

Katie, who has been a veterinary nurse for 14 years, also gained success with fellow Jack Russell, 10-year-old Sebastian in the Best Long-term Weight Management category.

Sebastian, who was also in the obese bracket, shed almost two kilos, amounting to 15 per cent of his body weight which he has now maintained for more than a year.

He was referred to Katie with his house mates Moffi, a Belgian Shepherd cross and Molly, a dachshund. The canine trio, who live in Skelmersdale, with Moffi and Molly’s owners Jacqueline and Pete Nicholson and their daughter Helen, son-in-law Jon, and two-year-old grandson Austin, who own Sebastian, have all now reached their target weight. 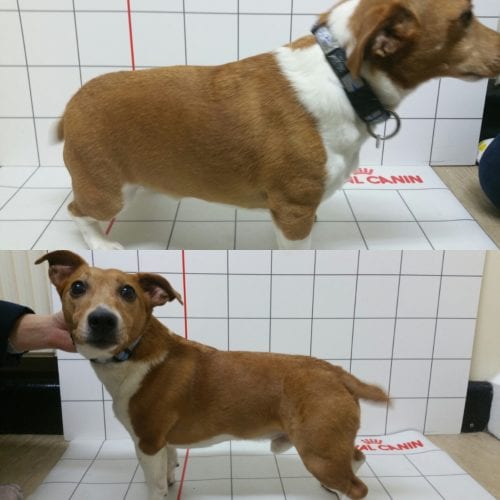 Jacqueline said: “When we found out Sebastian had won his category, both Helen and I laughed. We couldn’t believe it, although he has always been a super star in our eyes. He’s a lovely dog and we are very proud of his continued weight loss.

“Katie has been so helpful and there is a lovely rapport between us all now. She never makes you feel like you have done wrong but helps you to change your ways all together.

“Helen and I are looking forward to attending the ceremony with Katie. We felt it would be terrific to be there to pick up his trophy and see who wins the overall prize.

“I think it will also be nice to meet with other pet owners who have been on a similar journey to us.”

Both winning owners will receive a free pet photoshoot or portrait as part of their category prize.

Abbeycroft is a partner surgery in the independent Willows Veterinary Group.

The group offers a wealth of knowledge and expertise through 25 small animal practices, a referral veterinary hospital, two equine centres and a seven-office farm practice which are located across Cheshire and into the Wirral and Staffordshire. Willows is accredited by The Royal College of Veterinary Surgeons.

Four legged patients at the Abbeycroft surgery weight loss clinic embark on a series of regular visits to Katie, for a small start-up fee of £30, where they are assessed, weighed and their owners are given expert advice on their exercise and nutrition.