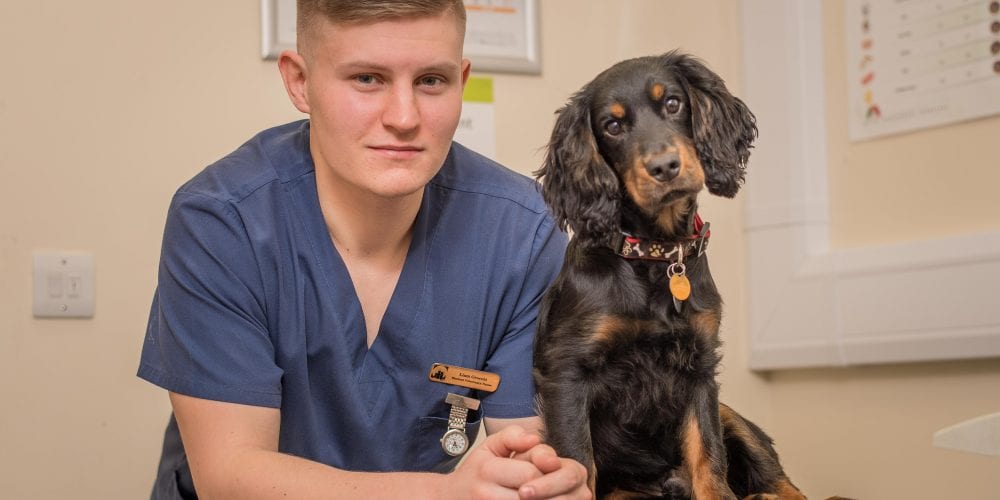 Liam Grocott, of Alsager Vet Centre which is part of the independently-owned Willows Veterinary Group, is one of three finalists up for the Practice Support Staff of the Year accolade at the 2017 Petplan Veterinary Awards.

Liam, 21, of Stoke on Trent, said he already ‘feels like a winner’ after beating 15,000 original contenders from across the UK to reach the glittering final at Birmingham’s International Convention Centre on April 6. Veterinary professionals from across the nation are entered for the awards each year.

He said: “Just to have got this far through such a stringent selection process is amazing. To go on and win it would be out of this world.

“It’s known throughout the veterinary world as the ‘Oscars’ of the industry and I am so pleased to have made it this far.” 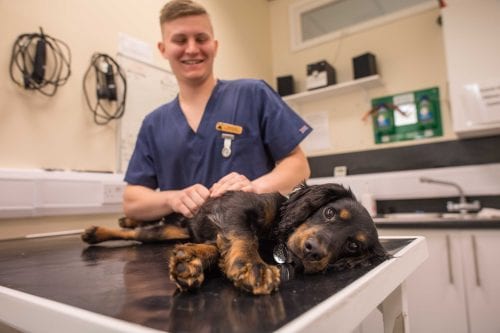 Vet Gill White, who heads up the Alsager Vet Centre team, said: “We are all so thrilled for him. Liam is an excellent member of staff who always goes the extra mile to care for the animals in his charge. He gives 110 per cent in every case.

“We’re proud he works at our Alsager surgery and absolutely everyone at Willows Veterinary Group will be rooting for him to come home with that top accolade on April 6.”

The annual awards are judged by an independent panel of leading professionals from the veterinary industry including presidents of the veterinary and nursing associations and previous winners.

Veterinary staff can be nominated by their peers or by pet owners in recognition of the fantastic work they do.

Liam, who joined the Alsager practice when it first opened in 2012, said he was honoured to have been nominated, but he has no idea who put his name forward.

He said: “It’s all done anonymously, quite hush, hush, so I don’t know even if it was one or two people, a fellow member of staff or a pet owner who nominated me. It could be anyone, but if they are reading this I really do want to say a big thank you to them for recommending me for such an important career distinction as this.”

The awards night, when the winners in each category will be revealed, is a highlight of the British Small Animal Veterinary Association congress held at Birmingham International Convention Centre from April 6-9.

Sponsored by insurers Petplan, which has worked closely with the veterinary profession for more than 40 years, the awards recognise everyone from administrative and support staff, right through to nurses and vets. They are seen as a vital opportunity for pet owners to recognise the hard work and dedication of the expert teams across the UK who keep cats, dogs, rabbits, guinea pigs, birds, fish and an array of other much loved creatures healthy.

Liam has three pets of his own, a Jack Russell terrier named Zack, a Cocker Spaniel called Duke and Frankie the ferret.

A lifelong animal lover, he said: “I am so pleased to have had the opportunity to do my training and work here at Alsager Vet Centre. When it comes to caring for small animals it doesn’t get much better than this. It’s good to work alongside such a knowledgeable and friendly bunch of people.

“If I win the UK Practice Support Staff of the Year title it will be as much a tribute to the support I’ve received from the team here as it is to all the work I’ve put in.”

Alsager Vet Centre is part of Willows Veterinary Group which offers a wealth of knowledge and expertise through 25 small animal practices, a referral veterinary hospital, two equine centres and a seven-office farm practice which are located across Cheshire and into North Wales, the Wirral and Staffordshire. Willows is accredited by The Royal College of Veterinary Surgeons.

Liam has always wanted to work with animals and his original ambition was to become a vet. But on doing work experience and starting his studies at Reaseheath College, Nantwich, he found he really enjoyed the nursing aspect of animal care.

He said: “It just seemed to suit me perfectly and I realised this was what I wanted to do, even more than becoming a vet. The nurses are essential to every practice and their interaction with each animal is key to helping restore its good health.”

Liam is in the final year of his four years of training, and attends the specialist Rodbaston College, south Staffordshire, one day a week, working at Alsager Vet Centre for the rest of the week. 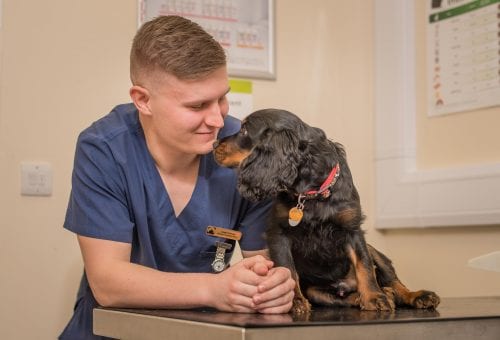 He never sees work as a chore but loves turning up every day to meet the animals and their owners.

He said: “It’s a privilege to be trusted to care for pets which people love so dearly. It can get quite emotional at times but it’s also great to see the smiles on owners’ faces when a sick animal leaves us fully recovered.”

Liam hopes to take his proud parents, Sam and Carl Grocott, of Milton, Stoke, to the national awards ceremony with him.

Sam is a healthcare assistant in a children’s A&E unit and Carl works for an air compressor company.

Liam laughed: “Mum and dad are really pleased. They were ecstatic when I told them I was in the final three. They’re almost as excited as I am!”