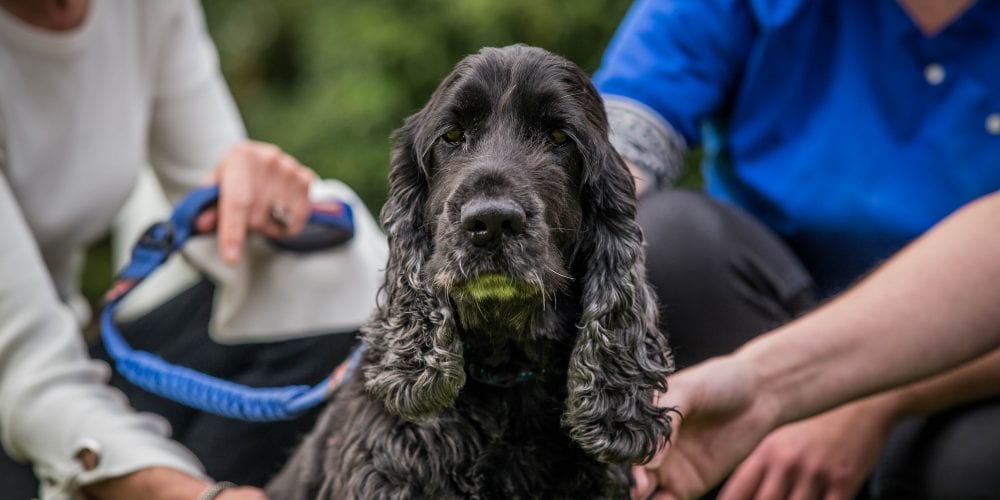 A DOG whose life was saved after a vet spotted a cancerous tumour on his nose has revisited the Knutsford surgery team who looked after him to celebrate an award they received for their client care.

Nine-year-old cocker spaniel Zak has been looked after at Holly House Veterinary Surgery, part of the independently-owned Willows Veterinary Group since he was a puppy.

He is now back enjoying a happy, healthy life with his owner Carol-Anne Erwin following treatment and facial reconstruction for the cancerous growth in his nostril.

Zak and Carol-Anne made a special trip to see the Holly House staff after they were rated outstanding for client engagement by the Royal College of Veterinary Surgeons (RCVS) – which runs a voluntary programme to accredit practices in the UK.

It is part of Willows Veterinary Group which offers a wealth of knowledge and expertise through 25 small animal practices, a referral veterinary hospital, two equine centres and a seven-office farm practice, located across Cheshire, into North Wales, the Wirral and Staffordshire.

Holly House is one of seven surgeries in the group which have recently been inspected and received top marks for their client care. 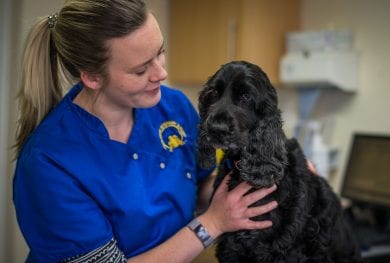 Head Vet Naomi Roberts, 31, who is now branch manager after recently taking over from Ian Hopkins, is delighted and said: “It’s all about customer service, providing outstanding client engagement and having happy customers – that’s definitely our aim.

“We provide personalised care for local people in Knutsford which is why we’ve got this award.

“I always think about how I would feel in the owners’ situation and how I’d like to be treated and how I’d want my pet treated.”

The mum of two from Wilmslow added: “It’s vital we put ourselves in our clients’ shoes. We have vast clinical knowledge but it’s important we make it understandable to the owner.”

Zak’s owner Carol-Anne hailed the Mobberley Road surgery as ‘second to none’ and praised the team for being so ‘positive’ and ‘sympathetic’ throughout Zak’s ordeal. 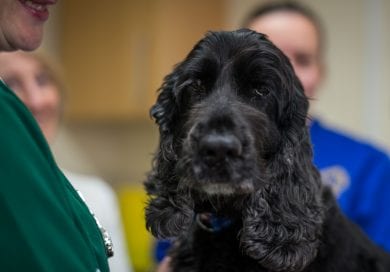 She had taken her much-loved pet to Holly House for a completely separate issue when Naomi noticed the worrying lump on his nose.

Carol-Anne said: “We thought he had something wrong with his joints. He was lethargic and putting on weight – he just wasn’t himself.

“When I took him to Holly House Naomi discovered two things – he had a thyroid condition, and after further investigation a cancerous lump on his nose.

“He underwent surgery at the Willows hospital and had a bit of his nose removed. The surgeon Prue Neath did an unbelievable job.

“Nobody would know he’d had an operation unless you told them. Prue and Naomi saved Zak – I’ve got a brand new dog now.

“They all did amazing work, including the nursing staff. Holly House is second to none. Had it not been for Naomi spotting the cancer in the first instance though we wouldn’t be where we are now.”

Naomi, who qualified as a vet eight years ago, recalled how the cancerous lump first came to her attention.

She said: “He came in for blood tests and we found he had an underactive thyroid which explained why he was so lethargic.

“When he came in for the tests I noticed the lump. I wanted him to have a biopsy as I was concerned it could be a mast cell tumour.

“I hoped it would come back and be something we didn’t have to worry about but it did turn out to be what I’d feared.

“Zak underwent facial reconstruction with my colleague Prue Neath but nobody would know he’d had it done unless it was pointed out.

“Some of the tumour was removed from the top of his palate as well. Prue created a flap of skin which she pulled further forward to cover the gap left by the tumour being removed.”

The RCVS promotes the gold standard of care and treatment for animals and around two years ago, it launched a more detailed assessment process for both vets seeking accreditation and their clients.

Staff at Holly House team were put through their paces including having to demonstrate bereavement counselling skills and their empathetic handling of difficult situations when owners are worried and upset about their much-loved pets.

For more information about Holly House go to www.knutsfordvets.com