A dog who had his neck run over by a Land Rover and lived to tell the tale has wowed vets with his “phenomenal” recovery.

Rio – now nicknamed the ‘wonder dog’ – miraculously survived with only a cracked rib and a swollen eye after the freak accident on a farm last month. 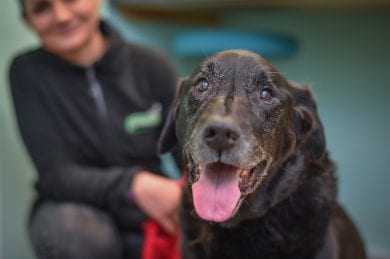 Now the 12-year-old Labrador-cross has bounced back thanks to Natalie West, a vet at Charter Veterinary Surgeons’ Congleton branch, who was so worried about him that she visited him several times throughout the night.

Her swift actions allowed the plucky pooch to make a speedy recovery.

Rio’s owner, Vikki Davenport, relived the moment she thought she would lose her beloved pet.

The 34-year-old from Congleton said: “My husband and I work from an office based on a farm and we bring Rio in with us.

“He had been walking around the yard when a Land Rover was moving off slowly, the bumper knocked Rio down and the wheel went over his neck.

“If my husband, Chris hadn’t have seen it with his own eyes, I’d never have believed what had happened.

“He scooped him up and put him in the back of the car and I drove to the vets. I hadn’t even seen Rio at this point.

“We phoned ahead and staff at the vets were ready waiting for us like a crash team when we arrived.”

The mum-of-two added: “I got a shock when I saw the state of Rio – his eye looked like it was hanging out, his face was all puffy and swollen and he was making an awful noise.

“We begged the vets to just fix him, whatever it took.

“But when we left him overnight, I didn’t know if I was saying goodbye to him for the last time, it was horrible, I was bordering on hysterical.”

Natalie scanned and X-rayed Rio, gave him pain relief and he was hospitalised overnight.

Meanwhile, the family were kept updated on their pet’s progress with regular phone calls from the surgery.

Natalie West, 23, is one of the vets at the West Road practice, which is part of the independently-owned Willows Veterinary Group.

Willows Veterinary Group offers a wealth of knowledge and expertise through 25 small animal practices, a referral veterinary hospital, two equine centres and a seven-office farm practice, located across Cheshire, into North Wales, the Wirral and Staffordshire. It is accredited by The Royal College of Veterinary Surgeons.

Natalie said: “When Rio was brought in, I was very concerned by his condition.

“His face was very swollen and his left eye looked like it had popped out of its socket.

“He had tyre marks over his neck and hips and he was breathing fast and panting due to the shock.

“We had to put an intravenous line in and give him oxygen to cope with the shock which was our first concern because shock can be fatal.

“I checked on him several times during the night because he’d had a lot of fluids but not urinated so I put a catheter into empty his bladder.

“I thought he’d have some nerve paralysis because his face was droopy but miraculously, he just got better and better as time went on.

“When we looked at the scans and x-rays we were amazed there was no major damage, he was very lucky.

“I certainly would have expected some kind of serious injury or internal bleeding so it’s remarkable how little injury he did have after what happened, he just had a cracked front rib.

“I am so pleased we have helped him to make such a good recovery and he is doing so well and back to his usual self.”

Vikki, who also has two cats, said: “I can’t thank Natalie and the team enough for what they did for us, Rio was in a right mess but they were all amazing.

“It was nice to know they care so much, especially with Natalie going back several times in the night to check on him. It’s clear it’s not just her job, it’s her passion.

“When we brought him home, we knew we’d have to be careful with him but he just jumped out of the car and ran up the stairs as if to say ‘what’s all the fuss about?’

“You wouldn’t know he’d been through what he has, it’s incredible that he survived really.

“My children have named him Rio the Wonderdog, which seems very appropriate.”