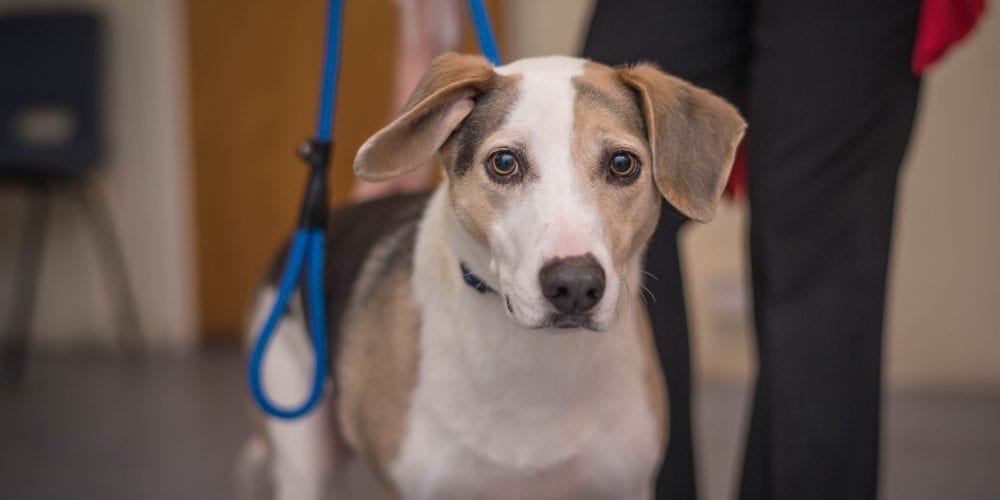 A WOMAN and her dog are helping each other on the road to recovery after both being struck with potentially fatal heart conditions within a month of each other.

Now, Pamela Yeulett from Runcorn has thanked staff at The Laurels Veterinary Surgery for saving the life of her beloved pet, Blue who was diagnosed with heartworm after being imported to the UK from Portugal.

The four-year-old crossbreed, who was born behind a dustbin in the Algarve, needed immediate medical attention and a lengthy treatment plan, which is still ongoing six months on.

Since then, the pair have been recovering from their ordeals together.

The 53-year-old said: “Blue was originally a rescue dog from Portugal, he was born behind a dustbin in a town in the Algarve.

“He came back to live in the UK with me and was happy and soon settled but then around six weeks later, he fell ill and was vomiting blood so I immediately took him to the vets.

“After lots of tests, he was diagnosed with heartworm, which came as a shock as he had been on worming tablets, and he started treatment straight away.”

Pamela added: “A month later, I fell ill and suffered a heart attack.

“I ended up having to have open heart surgery and had to stay in hospital for four weeks.

“When I came home, neither myself or Blue were in a very good state, he would sit and look at me as if to say: ‘I know what you’re going through,’ it was very much a shared event.

“It was ironic because most pets come out in sympathy of their owners, not the other way around!”

Heartworm is a parasitic roundworm that is spread through the bites of mosquitoes and because of that, is not prevalent in the UK.

It is caused by foot-long worms that live in the heart, lungs and associated blood vessels of affected pets, causing severe lung disease, heart failure and damage to other organs in the body. 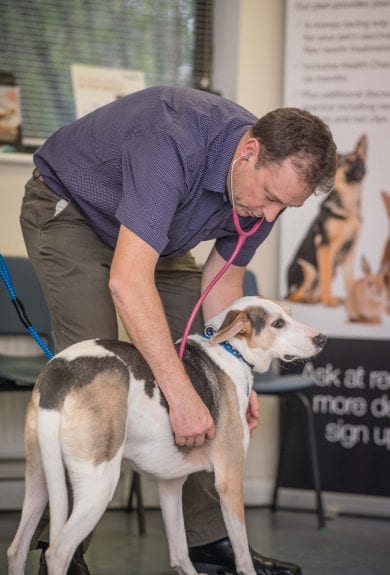 Vet, Tom Montgomery who treated Blue had never come across a case before.

The surgery, in Victoria Road, is part of Willows Veterinary Group. The group offers a wealth of knowledge and expertise through a network of 25 small animal practices, a referral veterinary hospital, two equine centres and a seven-office farm practice, located across Cheshire and into Greater Manchester, North Wales, the Wirral and Staffordshire. Willows is accredited by The Royal College of Veterinary Surgeons.

Tom said: “Because the disease doesn’t persist here, you only ever see it in imported dogs and Blue was the first case of heartworm I have ever come across in my professional career.

“When he came in, he was very lethargic, he was struggling to breathe and he had problems with some bleeding.

“The fact that he was a foreign dog led us to check for conditions we don’t see much of in this country.

“A blood test revealed Blue had heartworm and he began a long treatment process with multiple medicines such as antibiotics, steroids and antiparasitic drugs.”

Tom, who has worked as a small animals partner at the practice for seven years added: “Heartworm is a big killer of dogs if it’s not treated but I’m glad to say that Blue is on the mend.

“A recent blood test came back as negative for heartworm, which is good news, but he will continue to be given preventative antiworm treatment for the rest of his life.

“He was lucky we caught it at the right time and the last few weeks we’ve seen good results and improvement so we’re confident that Blue will make a full recovery.”

Pamela said she couldn’t thank Tom enough for his help with Blue and that she and her faithful canine friend are now assisting each other’s recovery with a light exercise regime, comfort and support.

She said: “Tom was brilliant, I was so relieved when Blue’s blood test came back negative thanks to Tom’s hard work in treating him.

“All the staff at the practice were really supportive on a practical and emotional level and went above and beyond, I couldn’t have asked for more.

“They knew I’d been very poorly myself and even arranged for a pet taxi and Tom would always ask about my health.”

She added: “Blue is not out of the woods yet, he’s got to have regular check-ups but he’s been my little rock, he’s my world.

“We’ve both been through the mill but we’re coming out the other side and recovering together.