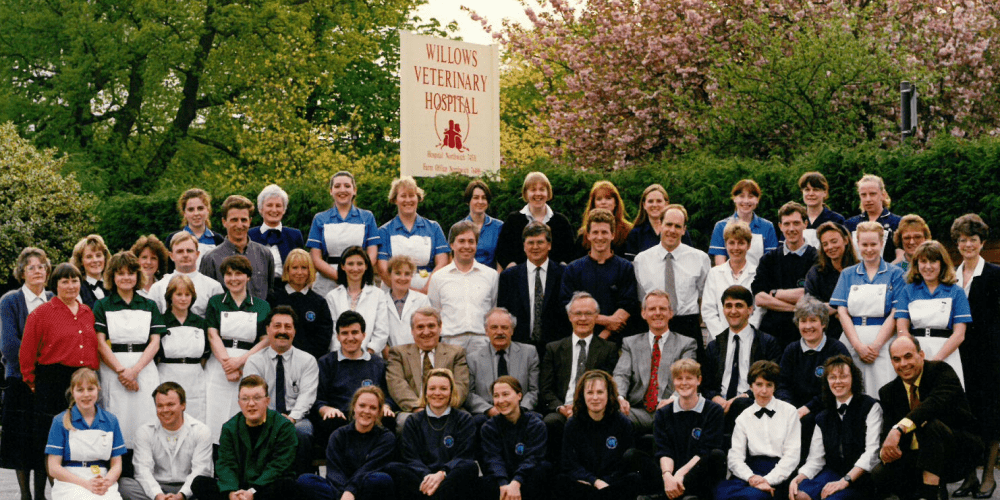 A veterinary practice has existed in Hartford since the 1930’s. Today’s modern practice dates from the early 60’s when, in 1962, Derek Carter, a 1961 Liverpool graduate came to assist John Twist – formerly of Wilson and Twist.

In those days, it was a three-man farm practice that ran a small animal surgery once a week on a Sunday morning. Soon afterwards, Gareth Llewellyn, a fellow ’61 Liverpool graduate, joined and immediately set out to develop a small animal service. When John Twist left in 1964 the Carter-Llewellyn Partnership was created and two years later another Liverpool vet college friend, Gareth Williams arrived.

The small animal business developed well and in 1968 the status of Small Animal Veterinary Hospital was awarded at Hartford; one of the very first in the North of England. Meanwhile, a surgery had been started in Winsford and a neighbouring practice in Weaverham was acquired.

In 1969, Mike Venables, a vet from the adjacent Alsager practice, joined as a partner and the nucleus of the original partnership was complete. A period of expansion followed, fuelled by the revenue from the MAFF Brucellosis and TB eradication schemes of the 1970’s. A farm practice was bought in Middlewich and a new surgery established there. New surgeries were subsequently added in Lymm and Warrington.

When Mike Venables retired from the farm practice in the late 70’s he pioneered the establishment of a small animal centre in Knutsford. The farm business grew further with the addition of work from two old established practitioners. Rodney Summer in South Liverpool and Hugh Ferguson in Warrington. The equine practice really took a leap in its development in 1978 with the arrival of Alex Scott. He eventually left his shared role as a farm vet to inspire the building of ‘The Ashbrook Equine Hospital’ at Allostock, now a leading equine referral centre with state of the art facilities. Alex retired in 2015 after injuring his knee badly while attending a horse.

Mark Proctor joined in 1980 and developed the southern area of the farm practice, culminating in the purchase of a farm practice in Tarporley in 1992. From this, the concept of a separate animal health business was born, leading to the establishment of Beeston Animal Health in 1994.

Morag Adams joined in 1981 and further developed Gareth Llewellyn’s original small animal hospital into the modern facility it is today. Morag has since moved to new pastures and the Hartford Hospital is run by Bruce Waddell, who joined in 2010. Referral services of the highest standard are provided via Oakwood Referrals partners and European specialists, Charlie Sale (Orthopaedics) and Prue Neath (soft tissue)

John Dawson joined the team in 1986 as a farm vet and was instrumental in expanding the northern area of the farm practice. In addition, he created a own cattle embryo transfer business, Embryonics, and organized numerous AI, Ultrasonography and Foot Trimming courses for farmers and other vets. John has since left to continue running the training business independently.

Simon Jones joined the farm side in 1987 and considerably expanded the businesses interests in the meat hygiene sector, Bovine Tuberculosis and export certification business. In later years, Simon became lead partner for the HR department of the group.

Beech House Veterinary Centre was relocated from its old site in Stockton Heath in 1988. This move, along with the modernisation in 2000, was overseen by Liz Crowsley, who became a partner in 1990. Liz subsequently ran the Hartford Small animal hospital but was tragically killed in 2010. Clients and colleagues alike still pay immense tribute to her Veterinary skills and superb bedside manner to this day.

The pig sector of the farm partnership business is a highly specialised area, the nucleus of which was built up by Gareth Williams. That work continued through Richard Thomas, who became a partner in 1997. Richard also works in the general farm practice and has developed another role as named Veterinary Surgeon for the Universities of Birmingham and Manchester.

Over the years, several other new Partners have joined the group – Ben Pedley worked as an assistant in the farm practice from 1993 and became a farm partner in 2004. There then followed new Small Animal Partners: Sean Cleary from Beech House and Ian Hopkins from Holly House, who joined in 2006.

In the farm practice, Darrell Irwin became a Partner in 2008 and has been instrumental in data collection and interpretation in dairy herds. Owen Tunney joined in 2010 and, alongside Darrell, spearheads new developments in the dairy sector. They were also joined in recent years by Emyr Rowlands and Jonny Duncan.

Roger Dixon joined in 2009 alongside Kerry Comb in the equine practice. Since Alex Scott left they have continued to develop Ashbrook Equine Hospital. Kate Sumner from the Hampton centre became a partner in 2014.

Other partners who joined the small animal division include, Tom McGowan at Acorn, West Kirby, Tom Montgomery at Runcorn, plus Stuart Becker and Pieter De Villiers in the Warrington area.

Surgery expansion has been mainly in the small animal division. Wilmslow (1999), Runcorn (2001) and Acorn Veterinary Hospital in West Kirby (2001). Second practices in Northwich and Warrington, plus one in Hale, were added to the group in 2004.

Since then new surgeries have been established in Alsager (2012), Denton and Birchwood, Warrington. Stewart McDonald’s surgery in Orford Lane, Warrington was acquired in 2015 as was the Clarendon branch in Altrincham. In 2013 the group took over the running of The Firs Veterinary Surgery in Kelsall from retiring vet Mick Christian. The surgery was later relocated to larger premises on Church Street.

In 2015 Willows Vet Group merged with the Charter Veterinary Surgeons based in Congleton, Biddulph, and Newcastle. Ian Robinson, Rob Hill, Marcus Johnstone and Steve Harris joined us at the outset and within the year appointed Steve Calveley as a further partner. The practice offers farm services from Congleton plus companion animal from the other 4 surgeries including satellite branches at Smallthorne, Stoke-on-Trent and Butt Lane, Talke.

From being a three man, mainly farm animal practice in 1962, today’s Group is a multi-vet and multi-discipline team working from 25 centres, employing over 300 people.

The Willows Veterinary Group joined VetPartners in 2018. VetPartners is made up of some of the UK’s most trusted and respected veterinary practices.The practice name will remain the same and so, too, will the high quality veterinary care and service our clients expect.

We are confident we will go from strength to strength with additional investment in technology, training and facilities to provide an outstanding level of care for animals.